“The aim of art is to represent not the outward appearance of things, but their inward significance.” – Aristotle

I was talking with a friend some time ago about photography and the process of finding meaning in and through this medium. She asked which comes first in the process for me: do I take the photo first and find meaning after looking at it? Or do I search for meaning and then try to find a photo opportunity that fits that meaning?

To start, I think this question illustrates one of the key differences between photography and other kinds of art, such as painting or sculpture. Given the purely creational nature of these other art forms, meaning can be imbued from the outset, poured into every stroke of the brush and swing of the hammer. Photography is different, however, because, when compared to these other forms, there is a heavier reliance on reality as it is. Yes, one can stage a photograph, but even then, there is still the need to capture what already exists.

The answer to this question is that I shoot first and then, while looking at the result, I do my best to draw meaning from what I see in the frame. I don’t know if this is the same for every photographer, but it seems like it would be difficult to do the opposite. Perhaps if I staged my photos, this would be more of the way I operate. Or, maybe a photographer more skilled than myself would be able to do this, but I’ve only ever claimed to be an amateur.

From the very beginning of posting photographs on this blog, I’ve done so under the title ‘The Amateur Photographer’. There has always been a part of these entries that has included my own personal comments, observations, interpretations, notes, etc. on most of the photos I publish on this site. The pictures themselves are obviously the centerpiece of these entries, as they should be, but my words have had their place, too.

However, some time has passed since I last published a post here under the title of ‘The Amateur Photographer’. This is because I started wondering about the value of giving personal feedback on photos that I, myself, have taken. I wanted to consider this further before continuing this series.

On some of the photographs, I share a few of my thoughts as they pertain to the process as a whole. I don’t say anything specific about the meaning I find in the photos. Instead, I let them stand on their own, talking only about various adjustments I made during editing and the like. This aspect of the series is focused more on the ‘non-professional’ and ‘less-skilled’ meanings of the word amateur. Additionally, there are others about which I say nothing at all.

It is my writing about the meaning in my photography that I want to focus primarily on in this post.

I’ll give an example of my finding meaning in a photo. Below is a screen-shot of a photo and my interpretation of it from ‘The Amateur Photographer – Madrid’. 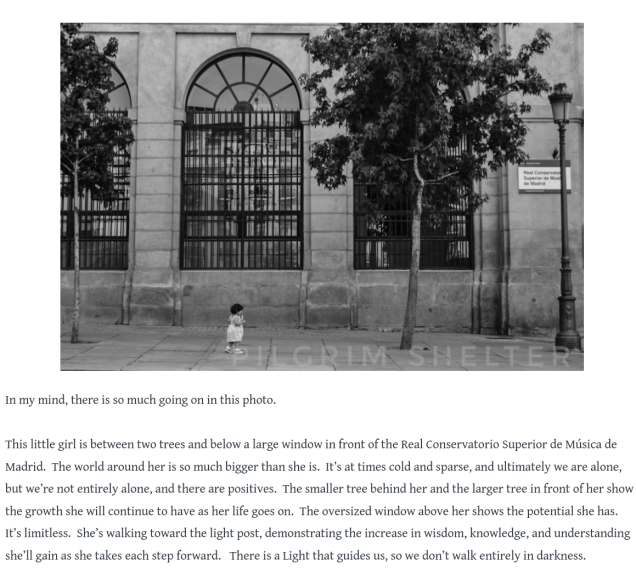 There is the thought, at least in my mind, that it may seem to be slightly self-serving to write about the meaning I find in my own photos. Yet, I don’t want to act as if my writings about these photos somehow increases their artistic merit or their objective beauty. Instead, I would like for my photographs to be judged independently, without my observations. Moreover, I don’t mean for my comments to be the sole means by which viewers see them. Mine is merely a partial, possible interpretation of the full meaning of each photograph.

The Other Iterations of ‘The Amateur Photographer’

Perhaps, then, this begs the question, ‘Why do I write about the photos at all?’

The simplest answer to this question is that it’s a search for truth and meaning in an increasingly unstable and uncertain world. When I look at these photographs and subsequently pull truth from them, I feel that I’m able to hold onto something that’s real.

Sometimes these pictures, and their respective meanings, are just ‘happy accidents’. I press the shutter, light comes into the lens, and a moment in time is captured. Sometimes the outcome is positive, resulting in a good shot. Often, though, that isn’t the case. From there, I either have to try again or find a different subject. In those moments when I manage to take a decent picture, it feels as if the entire process is vindicated. All of the less-than-adequate photos I’ve taken are worth the time and effort to get one that, at least by my consideration, is good. It’s in the discovery of ‘good photos’ that I feel compelled to write about what I personally see.

I’m often reminded of something someone said to me years ago about art. She said that once something is put out into the world, it’s no longer up to the artist how that piece is interpreted. If a viewer/reader/listener has a differing, or even opposite, interpretation than that which was intended by the artist/author/musician, it doesn’t matter because that work is no longer possessed by its creator. Instead, it’s the property of all, free to be interpreted by all in any way, as each individual sees fit.

For someone like me who believes in absolute truth, this was horrifying.

Depending on how a work is interpreted, it could potentially be used to make a statement opposite of that which its creator intended. Such a misuse of something I created was consistently in the back of my mind as I wrote. I raged against such a flippant use of my photographs and insisted on their ‘proper interpretation’, i.e., the interpretation that I gathered from them. Yet I don’t know if this was the appropriate response.

I have to realize that differing interpretations are not always a bad thing. One may see something I don’t see or think of something in a different way without undermining truth. For example, when listening to music, many people comment that hearing a song can refresh a memory and take them back to a different time. This can have little to do with the song itself or its meaning, but it doesn’t actually take anything away from the meaning, either. A similar result is possible with a photograph, and it would do nothing to impact the ultimate truth of that photo. Alternative understandings are not necessarily nefarious.

As difficult as It’s going to be to leave my photographs and their interpretation up to those who view them, I see this as something I need to do. If I say I believe in absolute truth, I need to do more than just believe—I need to trust it and its ability to be self-evident. This means leaving myself mostly out of the interpretation of the photos I produce once the production itself is complete.

A possible solution would be to begin giving titles to the photos I post, though the ability to distill meaning into the few words of a title is an art form in itself and may prove difficult. The previous sentence likely serves as evidence that brevity isn’t necessarily my strong suit at this point.

Regardless, I certainly plan to post more photos in the future. I’ll likely continue to do so under the series name, ‘The Amateur Photographer’. It’s possible that my compulsion to exercise control over exactly how the pictures are interpreted will overpower the restraint I want to show. If so, I’ll be sure to include a caveat that mine is not the only possible interpretation. This could even open a dialogue, which I would gladly welcome.

No matter what form it takes in future posts, above anything else, I’ll continue to keep reaching and searching for truth and meaning in everything I produce.

A pilgrimage is an intensely personal journey, but it is not one that a pilgrim undertakes alone.  I don’t want to ‘talk’ into a vacuum.  I want to hear other voices, too.  What I’m trying to say is, I want feedback!  Have I spoken something to you?  Is there something you think I should know?  Do you have a question about something I said?  Please leave a comment or contact me at Pilgrim.Brett@gmail.com

Also, follow me on the Pilgrim Shelter Facebook page to stay up to date on any new releases and for information about future posts

3 thoughts on “On Art, Truth, and Meaning: Considerations on ‘The Amateur Photographer’”